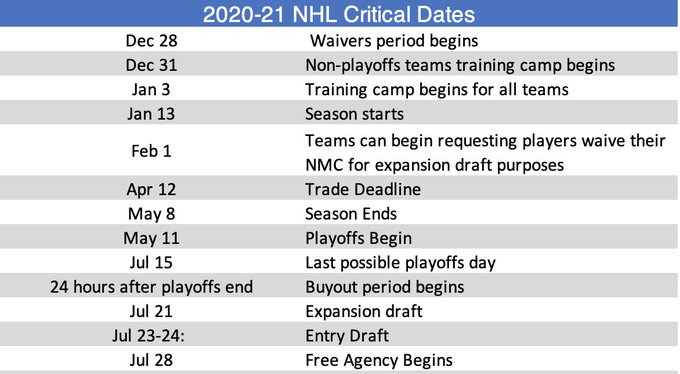 Santa Clara County is shut down through at least January 6th (probably longer). I assume the Sharks will follow the 49ers’ lead and set up shop out of state (Arizona?), at least for training camp, if not longer. Of course, my season ticket group now needs to sort things out.

Eta: Training camp is in Arizona.
ETA more: They are deferring all season tickets to 2021-2022.
"What a bunch of pedantic pricks." - sybian

So how soon until they trade with the Rangers and get Buchnevich and the best prospect in the deal for a package of prospects Gorton overvalues?

Degen, others, you around today? Want to start a dedicated thread for the World Juniors? Is there enough interest this year?
Top

Great! I'll wait until you work your thread-starting magic, then post my thoughts.

In the mean time, to make this sort of an NHL post, I'll just say that I'm looking forward to seeing Dominik Kahun in Edmonton this year. And Taylor Hall in Buffalo! But I'm still skeptical enough that I won't let myself get excited until the puck drops.
Top

Well, the season is nigh, and my Sharks will probably be bad. But, worse than that for this fan is that Joe Thornton is no longer on the team.

The Athletic has a great story on Thornton today, with reminiscences of their time with him by numerous players, former players and others. It really speaks to what a great, funny, unique guy he is. link

I'm sure I've told this story before, but in the spirit of the article, I'll share my Thornton memory: Several years ago (during the hockey offseason), I was on a plane for a business trip, ready for takeoff from San Francisco to somewhere I don't remember. It was one of those planes where after boarding the plane, you turn right for coach, or turn left for first class. I was sitting close to the entrance door, in the very first row of coach, on the far aisle as you board. So, after almost everyone had boarded and the line had dissipated, Joe Thornton appeared at the door, wearing board shorts and a t-shirt, looking like a surfer boy. He was heading for first class, but as luck would have it, he had to wait right next to me as somebody ahead of him put a suitcase into the overhead compartment. So, I stood up and said "hello" and told him I was a fan. He said, "Hey, thanks, man!" and was very gracious and chatted with me for a minute until his path was cleared and he said goodbye. A couple minutes later, a flight attendant came up to me. She said that she saw me talking to him and figured out it was some kind of celebrity I was speaking with, so she wanted to know who it was. I explained to her it was Joe Thornton and who he was. She then got more interested and said her son is a hockey player and wondered if Joe might sign something for him, so I encouraged her to ask him. Thirty minutes later, the plane is in the air, and the flight attendant comes back to me. She gushes about what a nice guy Thornton is. She said he asked questions about her son, and then wrote a personalized letter for her to give him. That woman was so thrilled, it was really nice to see.
"What a bunch of pedantic pricks." - sybian

It's always sad when an athlete leaves after so many years. I'm dreading the post-Crosby/post-Malkin years here. (Thankfully, the Pirates never keep anybody around long enough to get attached to them.)

You still have Brent Burns. And I see that Marleau is back. Is he going to play much, or is he going to be in a fourth-line/sentimentality role?
Top

It's always sad when an athlete leaves after so many years. I'm dreading the post-Crosby/post-Malkin years here. (Thankfully, the Pirates never keep anybody around long enough to get attached to them.)

You still have Brent Burns. And I see that Marleau is back. Is he going to play much, or is he going to be in a fourth-line/sentimentality role?

Yep. The Sharks need Burns and Marleau to find a bit of youth. I expect Patty to be the third line center, and hopefully mentor some kids.
"What a bunch of pedantic pricks." - sybian

One of the season preview articles at the Athletic included the note that if things go well for the Red Wings, they may be as good as the Sharks... who they had 29th in the league.
“All I'm sayin' is, he comes near me, I'll put him in the wall.”
Top

I find it hard to believe the Sharks are gonna be THAT bad. Though heaven help them if they are because it’s gonna take half a decade at best to dig out from their D contracts alone. Still I think they finish 4th in the (Whatever the name of the division is).
Exiled From America
Top

Won $200 in my work NFL pool and in trying to think of a rass-centric way to spend it I googled "nhl center ice 2021" and the first hit is a link to an article on NHL.com discussing Center Ice for the 2010 season.

ETA: guess it's "NHL Live" now? Also something called NHL.TV on the main site but that currently is just $10 to watch last season's games.

ETA2: That's Canada-only? Cable company has a page for NHL Center Ice that says it isn't currently available because the NHL has canceled the season...
I felt aswirl with warm secretions.
Top

oh and on a personal note if you want to get by local blackouts, subscribe to Yonder TV for $30/year (https://www.yonder.tv/aff.php?aff=363) - it enables you to get every game + postseason. perfect for me being an MLB/NHL junkie.
Top

Yeah, subsequent googling found references to auto-renewals going through right around the time the league announced the season. Still can't find a way from NHL dotcom to sign up for NHL TV for the 2021 season, or to get xfinity to let me sign up for Center/re Ice for the upcoming season.
I felt aswirl with warm secretions.
Top

Although the Pens is a bit aggressive 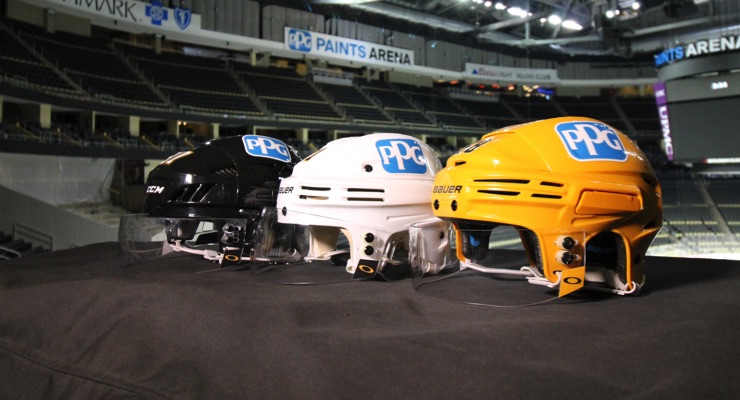 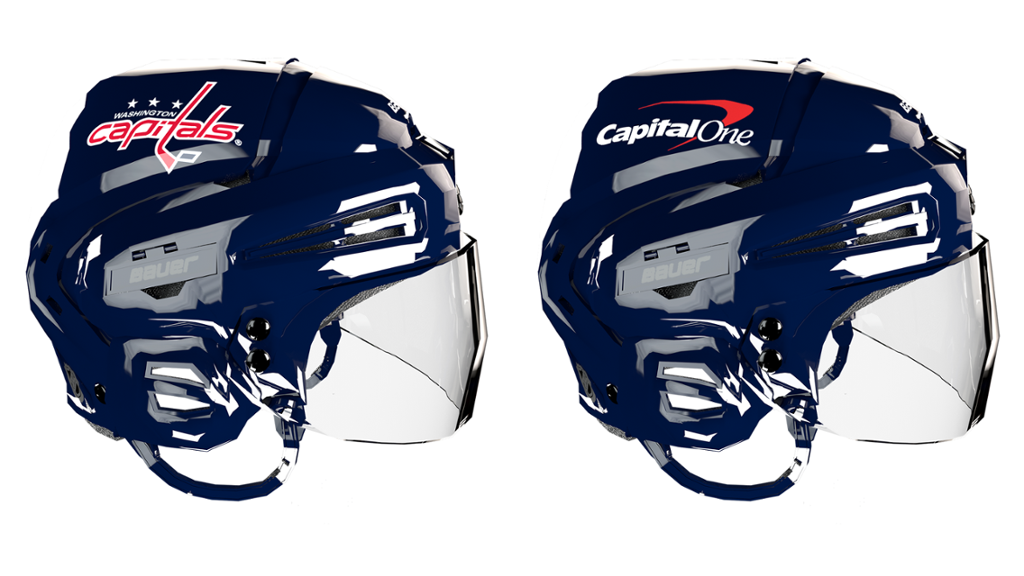 Helps to have a sponsor with a symbiotic name.
"What a bunch of pedantic pricks." - sybian

hm. i'm shocked that i actually don't mind it so much. i'm sure a slippery slope at some point will lead to the jerseys (awful) but helmet sponsorship? sure, why not. They're never going back from it now, though.

(...and now if only there were a popular sword manufacturer for the Sabres...)
Top

Small jerseys ones arent bad. We have them in the CFL. 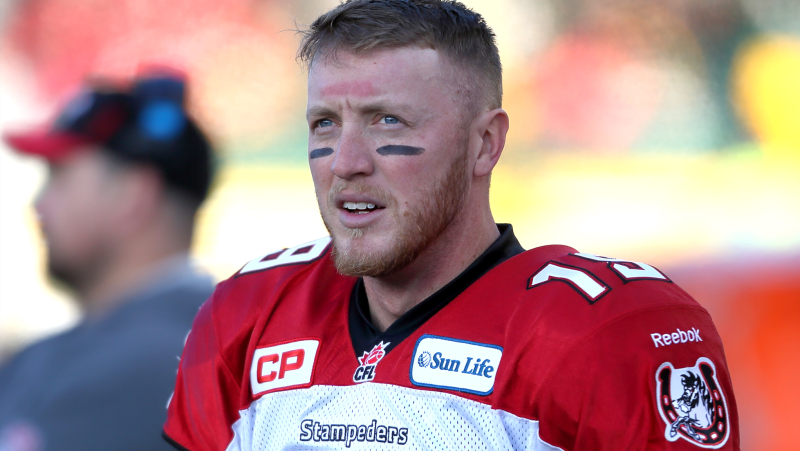 I prefer hockey leaves the sweaters alone but I think we all see where it's headed. Helmets? Go nuts. Fuck, make everyone on the Blues wear a sponsored sail tarp. That'd be fun to watch.
Dances with Wolves (1) - BSF

The NBA did a decent job with the patches.
Canadian Indoor lacrosse has the tramp stamp sponsor..and in some cases it goes player-by-player (guessing minor hockey does this too) 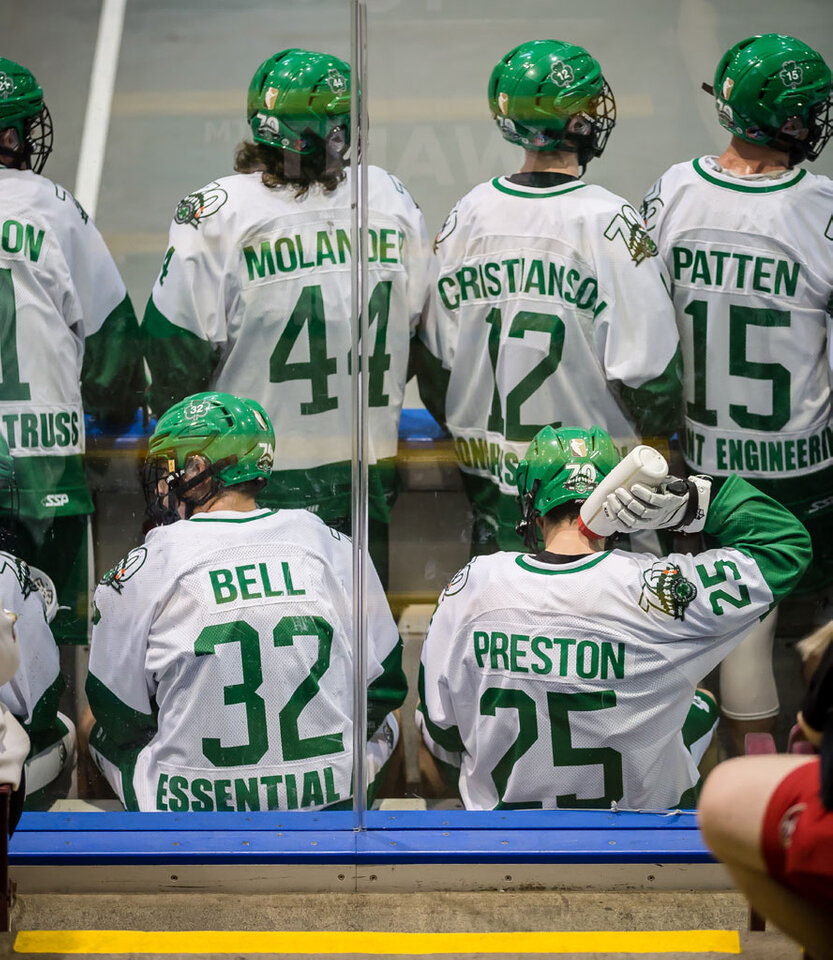 and yeah the horse is not going back in the barn. Teams need $ during covid and giving up revenue streams ain't happening. MLSist said league is targeting sponsors for COVID face masks.
Top

Really glad the Bolts aren't jumping in on this blatant cash grab, you'd hate to see the iconic Leafs uni sullied.
I took a two hour nap and cried during parks and Rec. it was awesome and terrifying.
Top

They will. Every team will by end of the season likely. Just haven’t found right price/partner yet I’ll bet.
Exiled From America
Top

I'm sure they'll pick up a former Rangers sponsor and get twice as much value out of the partnership.

They will. Every team will by end of the season likely. Just haven’t found right price/partner yet I’ll bet.

Amazes me how long some of these teams must have had some standing offers to have this many on board already.

Maybe Chicago can put a slant eyed asian on the helmet to really lean into things.
Dances with Wolves (1) - BSF

Well most of these teams are so tied up in partnerships, naming, practice facility, suite rentals, etc. other businesses the owners are connected to/their friends are connected to, activating these are pretty quick.
Top

I'm sure they'll pick up a former Rangers sponsor and get twice as much value out of the partnership.

😊
I took a two hour nap and cried during parks and Rec. it was awesome and terrifying.
Top

If you're trying to distract everybody from the Pens' messy offseason, it looks like it worked. Yes, let's keep talking about helmets. Ignore the PPP loan and the minor-league coach's lawsuit.

Altho I do kind of want to talk about co-owner Ron Burkle buying Neverland Ranch. I had just finished reading a bio of Michael Jackson when that news broke, and I was pretty gobsmacked by it. (Not quite as weird as Rashard Mendenhall buying Richard Pryor's house, tho.)
Top

Been waiting for someone else to bring up the PPP loan. And that coming out around the same time as the Neverland Ranch purchase wasn’t good.

And I didn’t know (or more likely forgot because I watched the first season) Mendenhall wrote for Ballers and bought Pryor’s house. That guy...
I felt aswirl with warm secretions.
Top

It's a landmark house. That's the house where Pryor set himself on fire! How does Mendenhall, of all people, end up there?
Top

Wait. They sold the naming rights to the frigging Divisions???
This "Whoa, Nelly" is brought to you by Nelly's Organic candy bars. Tastes like the good stuff, without the bad stuff. Whoa, Nelly!
Top